The Host of Archons is accepted as the manifestation of Morrow’s will on Caen, and their appearances are always momentous. Awe-inspiring as they are, the sight of a Morrowan archon can chill the blood of even the most pious, as they herald events that are both terrifying and world-changing. While most historical examples of archon manifestations have involved prophecy, they have also proven willing to wield their power directly in battle. Morrow’s archons represent hope but also underscore the potential doom awaiting humanity should this war against the darkness be lost.

Animosity [ Menite ] - This model cannot be part of an army that includes Menite models.

Thoughts on the Morrowan Archon

Morrowan Archon in a nutshell

The Morrowan Archon is a strong support piece that brings solid, if unremarkable offence alongside significant defensive support effects. She can't hit as hard or take as much punishment as her Menite counterpart, but she makes up for with the rules that benefit the whole army. Blinding Radiance coupled with a 13/20 stat line makes it a very difficult piece to remove for its points, so it usually plays forward and forces the opposing force to deal with it as the rest of your force closes in. At 8 points it's on the cheaper side for Archons, so even if many players don't rate it highly, it will sneak into many lists as a one or two off. 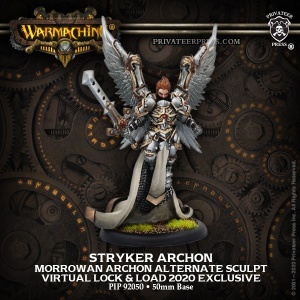