During the rare moments Goreshade is not in study or slaughter he stares into the empty night remembering a time when he was positioned to seize control of an entire nation and not just another general in the legions of the Dragonfather.

Warcaster Unit - All warcasters come with a stack of standard special rules - most notably being awesome. Furthermore, this warcaster comes with some troopers that can be ordered around. Click here for a newbie-friendly recap, or click here for the full rules.

This unit is made up of Goreshade and the Deathwalker.

Add to play one unit of Bane Warriors (one Leader and five Grunts). Place each model completely within 3" of Goreshade.

Goreshade1 is a middling battlegroup caster who brings a bit of a Stealth skew and anti-spell tech to the table. He lacks the focus efficiency to run a really large battlegroup (unless you spam something focus efficient, like Seethers).

Also, his buffs and debuffs are all tied to himself or Deathwalker (who has to be nearby) meaning he has to play fairly forward to apply them, which can leave him exposed to danger.

Pop his feat to get a small unit of Bane Warriors within charging range of something important (like the enemy caster) and combine the Dark Shroud and Breath Taker debuffs. Dark Summons is powerful in low-point games.

Don't get carried away with the Banes - remember to finish all your business with Goreshade after putting the Banes on the table, because if you start moving them then you've stopped his activation!

Goreshade likes to bully his way up the middle of the table, casting Shadowmancer to keep himself and his 'jacks safe and casting Lamentation to make his opponent's life miserable.

As battlelines close, he will pop feat and use the free Banes to take something nasty down.

Scourge of the Broken Coast


Not a bad theme for Goreshade1, although he certainly isn't the best caster for that theme. He has a damage buff which the girls like.

In 2020.10 Phillip Melvin, one of the LOS authors, put together this list for the Brawlmachine format. He even wrote about it's playstyle and expanding it beyond 25 points, which you can read here. 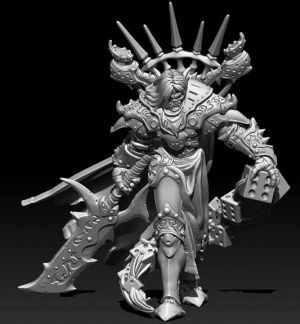 Rules Clarification : Undead - None yet. (Edit)


Rules Clarification : Bleed - None yet. (Edit)