Colbie Sterling, Captain of the BRI

A skilled ’jack marshal and mechanik and a versatile fighter, Colbie Sterling is the captain of a small mercenary company known as the Black River Irregulars—a group with a reputation for getting things done even when it means putting themselves at risk. Sterling seeks the most lucrative contracts, with the goal of amassing enough wealth to transform the BRI into a truly formidable mercenary force.

Mercenary - This model will work for Crucible Guard, Cygnar, Khador, or Protectorate.

Thoughts on Colbie Sterling, Captain of the BRI

Colbie Sterling, Captain of the BRI in a Nutshell

Colbie is a cheap jack marshal who can repair non-faction jacks. Because Meg is a better marshal AND a better mechanic, she rarely sees the table. One situation where she might be taken in the Llaelese Resistance theme where she can be taken but Dirty Meg can not. The other would be if you want Meg and Colbie as two cheap marshals in Irregulars.

Assuming you want to give her a 'jack, there are a few options: 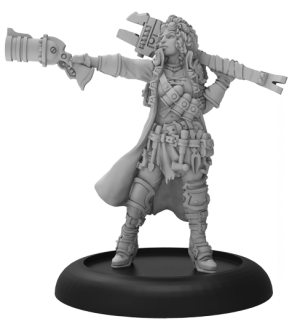 Warjacks she can take

With the way Mercenary battlegroups work, this model can't simply control any Mercenary warjack, and instead is limited to the following choices: