Cephalyx specialized in unleashing formidable mental powers to augment the drudges they command or to annihilate foes, mind benders can instill in their enslaved warriors a strength and savagery beyond ordinary fleshly limitations. These drudges sometimes serve as conduits for the mind bender’s overwhelming rending mental attacks, though they are consumed in the process.

Limited Employment - This model can be included only in an army made using a Cephalyx Theme force.

The Mind Bender and Drudges are a support unit for the Cephalyx - not as hard hitting as the Mind Slavers but instead acting to empower the mind slavers and turn them into a wrecking crew.

You shouldn't be trying to get in melee with this unit, you should be sacrificing the Drudges to fuel the Bender's spells. Most of the time that'll be Adrenal Flood cast 3 times on Drudges in a different unit. 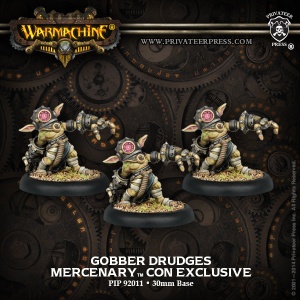 Rules Clarification : Tough - None yet. (Edit)